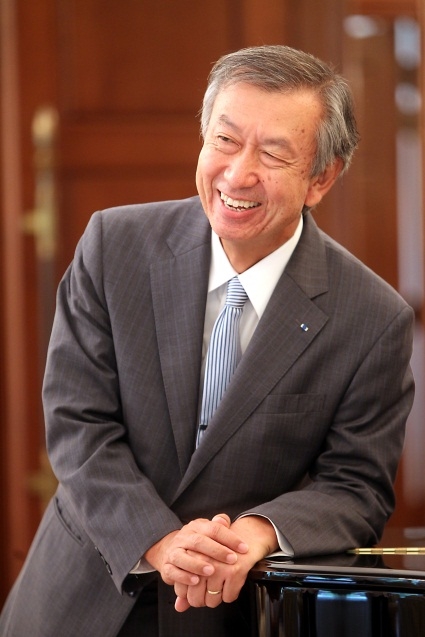 On the 6th of March, together with my family, I returned to Malaysia – a country where I served 20 years ago – to assume a new responsibility as Ambassador of Japan to Malaysia.  Upon my arrival, I was full of wonder at all the changes I saw.  Sadly, the houses and streets I used to pass through no longer exist.  Despite my sense of loss, I am full of admiration for the efforts made by the Malaysian government and people throughout those years to transform this nation into a modernised economy.  It is a real eye-opener for me.

Coming back to this familiar country and catching up with my old acquaintances, I wish to feel and confirm what are the newly growing developments, and what have not changed as precious cores, between the two peoples.

In nearly a quarter of a century, the relationship between the two countries is bound to have undergone changes.  So are relations between Japan and Southeast Asia.  With Malaysia’s economy leaving the semi-developed level into a stage much closer to the developed, the bilateral relationship has already shifted from donor-recipient relations to those of deepening economic partnership.

20 years ago, merely dispatching a small troop of the Japanese Self Defence Forces overseas could have made some quarters inside Japan raise their eyebrows.  This led to our failure to meet expectations from countries in Southeast Asia, including Malaysia.   Now in the search for the missing Malaysian Airlines’ flight bound to China, however, several aircraft with more than 100 personnel from the SDF and the Coast Guard have been engaging operations day after day from Subang airport.

The Association of South-East Asian Nations (ASEAN), to whose foundation Japan offered assistance, already overcame cold-war confrontation, and has been deepening co-operation while expanding membership.  The next year is set as a year to elevate ASEAN into an economic community.  Malaysia is expected to play an important role as Chair of the ASEAN in 2015.  Japan, for its part, is willing to provide good office, if need be.

It is much to my relief that, amidst such changes and developments, bilateral ties between our two countries have continued to enjoy expansion and enrichment, even in those years of economic stagnation and political struggles in Japan notwithstanding.  Japanese companies, currently doing business in Malaysia, have been burgeoning to reach around 1,400 in number, and have diversified year after year, responding to its economic advancement.  Besides manufacturing industry, which is a traditional key sector, other industries, such as those in service sectors, have joined in Malaysia.

The Look East Policy, which has especially strengthened the bonds between our two nations, is now picking up new vigour to create “its Second Wave”.  The special ties between Japanese and Malaysians blooming throughout the past 30 years lie on the foundation of this policy.  Up to date, no less than 15,000 Malaysians have studied in Japan under this policy.  Upon their return to Malaysia, they work for the development of Malaysia and for the promotion of friendship bridging our two nations.  The Second Wave of the Look East Policy would, I believe, upgrade it onto a new stage of our partnership.

Throughout all those years of developments and changes, nonetheless, the heart of Malaysians seems unchanged.  Hospitable, polite, kind, and above all, Japanophile, Malaysians value highly the ties of their family and their local community, respecting traditions.  Malaysians are polite, considerate, compassionate and civilised.  I would, particularly, be pleased if my impressions of the Malaysian people 20 years ago remain unchanged.
In concluding my note of greetings, I now feel immensely honoured to join in the ongoing undertakings with you in strengthening further the ties between Malaysia and Japan.  Your advice, suggestions and contributions are all very much appreciated.