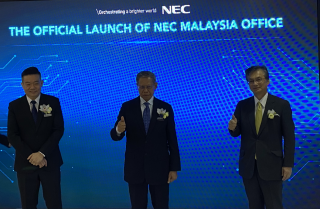 Ambassador Oka delivered the opening speech and expressed his confidence that NEC would spearhead further cooperation between Malaysia and Japan in the new digital era through its contribution to the development of Malaysia’s digital economy such as building high-capacity submarine cables and developing a credible digital platform with its advanced technologies. YB Dato’ Sri Mustapa, in his speech, also expressed his expectation for NEC and its innovative technologies to play an important role in the development of Malaysia’s digital economy.