Visit by Ambassador and Madam Oka to Westport, Port Klang 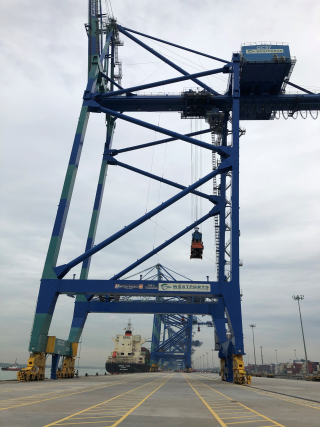 On 7th January, Ambassador and Madam Oka visited Westport in Port Klang. Port Klang is a hub port to connect East Asia, the Middle East, Europe and Africa. The container port traffic is the 12th largest in the world and is twice as large as that of Tokyo port which is the largest port in Japan. Port Klang plays an important role in the trade between Japan and Malaysia.

During the visit, Mr Eddie Lee, CEO of Westports Malaysia Sdn. Bhd, explained the outline of Westport including the container port traffic, facilities to handle containers and container terminal expansion plan. Furthermore, during the field tour of Westport, we learned that 80% of the quay cranes and 100% of the Rubber Tired Gantry (RTG) cranes were manufactured in Japan, and acknowledged that Japanese skills played an important part in support of the logistics sector in Malaysia. Malaysia has the fifth largest container port traffic in the world.